Despite a majority of residents that voiced their opposition, the five members of the Viera East Community Development District Board of Supervisors unanimously approved a 20-year bond that will see more than $11 million put toward improvements at the Viera East Golf Club and golf course.

The vote came after a heated public hearing before a standing-room-only crowd July 25 in the multi-purpose room of the Faith Lutheran Church, 5550 Faith Drive in Viera.

These enhancements include:
* Clubhouse renovations, including a banquet facility at a cost of $2.9 million
* A new irrigation system for $2 million
* Bunker renovations for $1.1 million

The complete budget for the project is listed below. In addition to the $9 million in expenses, homeowners also will pay $2 million in interest. 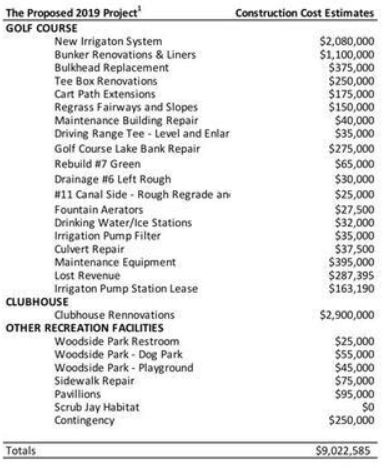 In order to pay off the $11 million bond, Viera East homeowners will have to foot the bill. The assessment will take effect after the VECDD’s water management assessment bond is paid off in 2023.

Homeowners in Six Mile Creek, Crane Creek, Cross Creek and some homeowners in the south section of the Indian River Colony Club are not affected by the bond. There are more than 4,200 households in the VECDD. Of that total, 791 houses are on the golf course.

Viera East Golf Club is an 18-hole course that opened in 1994, and the club projects 54,000 rounds will be played there for the fiscal year ending in September.

Although the board unanimously approved the bond, opposition to the VECDD’s purchasing of it may be decided by the courts.

That’s because several attorneys plan on filing an injunction to prevent the VECDD from purchasing the bond.

Palm Bay attorney Jack Spira and Melbourne attorney Blake Stewart, each representing several commercial owners and homeowners, said what the board did was unconstitutional and that Florida laws allow them to get an injunction.

“Commercial property owners do not get ‘direct special benefit’ from this assessment,” Spira said. “We are going to seek an injunction because it’s not fair that the business community has to pay four times the amount of the loan.”

Steven Zucker, an attorney representing the VECDD, had no comment about the pending litigation. “Homeowners and commercial property owners have that right to file a lawsuit,” he said.

Many residents voiced their opinions during the 2 ½-hour public hearing and meeting, stating that those living along the course would benefit disproportionately from other homeowners.

Other residents complained that three of the five board members live along the golf course and should recuse themselves from voting because it was a “conflict of interest.”

Created in 1991, the VECDD is accountable for the development, operation, and upkeep of infrastructure corresponding to the golfing direction, an 85-lake stormwater gadget, conservation spaces, paved trails and sidewalks, and Woodside Park.

The VECDD is a local government entity authorized by Chapter 190 of the Florida Statutes as amended, and created by ordinance of Brevard County as an alternative method of planning, acquiring, operating and maintaining community-wide improvements in planned communities. A CDD provides the “solution” to Florida’s need to provide valuable community infrastructure generated by growth, ultimately without overburdening other governments and their taxpaying residents.

Community development districts represent a major advancement in Florida’s effort to manage its growth effectively and efficiently. This allows a developer to establish higher construction standards, meanwhile providing a long-term solution to the operation and maintenance of the community’s facilities.

The VECDD is organized similar to other local governments in Florida, in that the legislative body is composed of a five-member board known as the Board of Supervisors. The board establishes the policy of the district in accordance with Florida law.

The district encompasses 2,825 acres east of Interstate 95 from Wickham Highway northward into Rockledge.

Tim Melloh, general manager for the Viera East Golf Club and Course, said the bond is necessary to upgrade the facility.

“It’s been 25 years since we started and many areas are well past their life expectancy,” he said. “We need to upgrade our facility.”

While many golf courses around the state and nation are failing and closing, Melloh said Viera East made about a $50,000 profit last year but needs to make the improvements to stay competitive with other area golf courses.

“A lot of people don’t understand that these improvements will help their property values in the VECDD,” he said.

Robert Dale, who lives in the Osprey development, and is the designated spokesman for the business community in the Corporate Park in Viera, disagreed, saying the proposed bond “is an irresponsible investment for the community.”

Dale said 80-90 percent of the Viera East community has nothing to do with the golf course, but yet it is expected to subsidize the 10-20 percent that use the golf course.

In a recent survey of 265 residents given to the board prior to the public hearing, Dale said 87 percent of the residents opposed the golf course enhancements. “And these were all residents of Viera East that responded to the survey,” Dale said.

“The VECDD should not keep the residents in perpetual debt,” Dale told the board. “If the bond offer is so critical, and easy to justify, why is the board making this decision unilaterally? Why would the board not let the voters decide something of this magnitude by way of a referendum?”