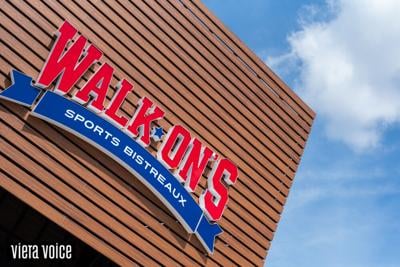 A taste of Louisiana’s Cajun cuisine is here with the opening of Walk-On’s Sports Bistreaux.

“I cannot tell you how excited we are about opening our 50th location in wonderful Viera, Florida,” said Brandon Landry, the founder, co-owner and CEO of Walk-On’s.

The restaurant bills itself as a place for dinner with family, for a date night, for cocktails with the girls or to watch a game on one of the dozens of big screen televisions.

Landry said he started the idea of Walk-On’s as a school project 18 years ago at Louisiana State University.

Landry, who earned a spot on the LSU basketball team as a walk-on, played with the team from 1997 to 2000. It was around that time that the idea of Walk-On’s Bistreaux and Bar was born. Soon the first Walk-On’s was opened.

“It’s been a great process,” Landry said. “We’re excited to be

Courtney Fowler said it took about three years to get the restaurant built and opened.

“It’s been a long three-year process, but we’re grateful to everybody that helped us along the way,’ she said to a crowd that gathered March 22 in front of the restaurant for a ribbon cutting and official opening.