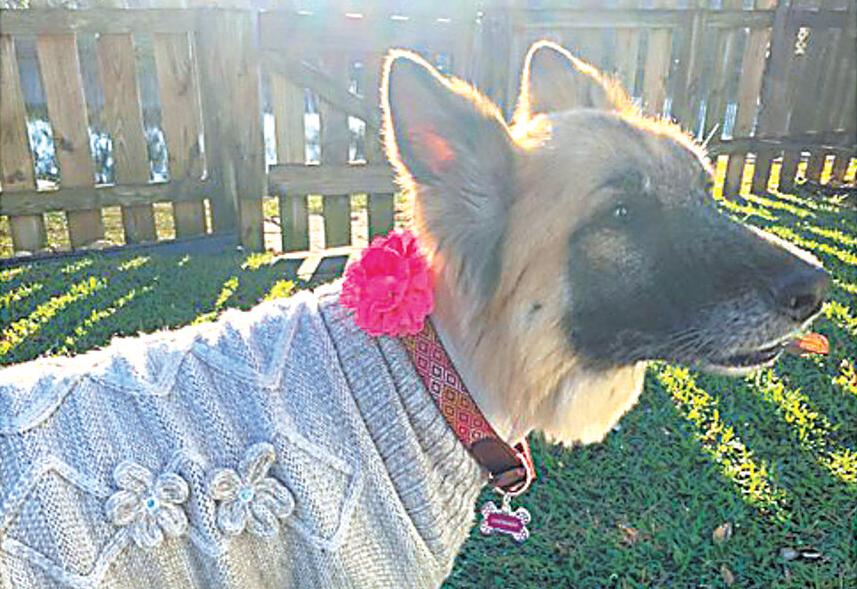 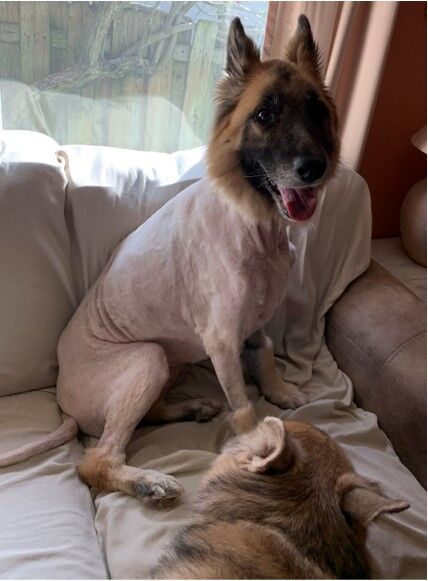 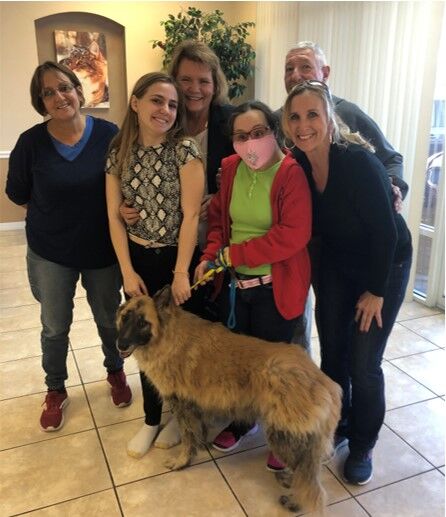 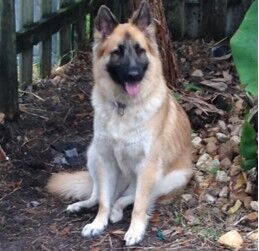 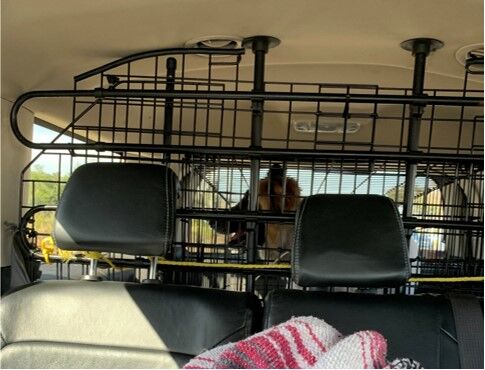 It started by getting dressed up to go to a neighbor’s funeral. It ended with a run around Indian River Colony Club in an effort to catch a lost dog.

Cherokee, an 8-year-old Belgian Tervuren who belongs to Charlotte Rose of Eau Gallie, had gotten loose on a visit to the veterinarian at SunShine Animal Hospital near the Pineda Causeway on Wickham Road. That was the beginning of a 33-day adventure which saw the community unite to find a lost dog.

“I was up all night with her; she had a UTI (upper tract infection),’’ Rose said. “The next morning, my husband took her to the vet. She’s more my dog but, on occasion, he has to take her to the vet. I was just exhausted.’’

After the vehicle was backed up to SunShine Animal Hospital, Cherokee slipped past three people after the hatch was opened.

“She stayed in that area for a couple of days,’’ Rose said. “But, we weren’t able to catch her. We went back and forth, and hired a trapper to help catch her. She had always been a skittish puppy from Day one.’’

Angela Friers, the executive director at SPCA of Brevard, knew what to do that first night through social media.

“Angela was instrumental in getting the word out,’’ Rose said. “She contacted Lost and Found Pets of Brevard. She got a thousand eyes on Cherokee. She’s the only animal that’s ever gotten 1,000 shares off a post there. That doesn’t include the county site, Facebook and other sites. Angela was the first person to post for us.’’

Edgar and her grandmother, Judy Baldwin, joined the search about 12 days before Cherokee was captured. Cherokee had been spotted in Baldwin’s Sawgrass Key neighborhood in Suntree.

Baldwin and another neighbor, Cliff Conner, had joined the search and put out food in their neighborhood.

Prior to that, Cherokee had been spotted at Windover Farms, The Preserve, Brevard Zoo Linear Trail and in Grand Haven.

“I spotted her near Grand Haven and she just gave me the side eye and kept going,’’ Rose said. “We set up feeding stations and cameras were set up in several locations.’’

On the afternoon of Feb. 2, Baldwin received a Facebook message that Cherokee had been spotted at Indian River Colony Club.

“I called my granddaughter to let her know that the dog had been spotted,’’ Baldwin said. “I didn’t have any food or a leash.’’

Baldwin had an appointment with a dermatologist that she thought was scheduled for 2 p.m. It was at 3 p.m. instead. Baldwin had entered the development with the permission of security at the gate.

“I was at the whole other end of the property when we heard that Cherokee was near the main gate,’’ Baldwin said. “We didn’t want her to get out that way.’’

Edgar spotted Cherokee as she entered the development.

“I was wearing brand-new thigh high boots with 3-inch heels,’’ Edgar said. “When I pulled in, I saw the dog about 20 feet in front of the car. My adrenaline was pumping. I threw my keys on top of the car after I got out. All I could think about was the really nice outfit that I was wearing and trying to run after her in heels.’’

Conner saw Edgar in pursuit of the dog and eventually he was able to get Edgar’s attention to get into the car.

“Emily could have run all day long, and she never would have caught the dog,’’ Conner said. “Cherokee was moving fast.’’

Conner and Edgar eventually caught up to Cherokee, who had settled underneath a maintenance worker’s golf cart in an attempt to hide.

“I had some of Cherokee’s treats,’’ Conner said. “I got down on my hands and knees to give her the cheese and treats. This helped calm her down. There were around eight to 12 people calling her name by this point. Eventually, we were able to get a leash on her.’’

After 33 days, Cherokee was a mess.

“She had just gone through a swamp,’’ Conner said. “The bottom half of her body was caked with mud and she was all matted and covered in burrs.’’

Julie Roberts of Indian River Colony Club had been alerted by a concerned citizen, John Lynch, the day before that Cherokee had been spotted in the area. Roberts sent out a mass email to the residents and staff that Cherokee might be inside the gated community.

“I said that I would I do anything to help,’’ Roberts said. “I do dog rescue. I know how agonizing this can be. I cried when they found the dog. I’m a big animal person. I was ecstatic for the owner.’’

While Conner fed Cherokee, the maintenance workers gathered in a circle to prevent Cherokee from escaping.

“Cherokee wasn’t aggressive,’’ Conner said. “I had the cheese and treats. I also had some of the owner’s clothing, so she could recognize the owner’s scent. A lot of people came through to do what it takes to get it done. I had given up hope when I saw her go into the swamp in the Summit neighborhood. I thought alligators would get her.’’

After getting a leash on her with the help of the maintenance workers, Baldwin and Edgar guided Cherokee to Baldwin’s husband’s red Jaguar. She had borrowed the car to go to the dermatologist while her car was in the shop.

“The dog from the neck down was nothing but caked mud,’’ Baldwin said. “She had bleeding paws. I was worried about what my husband would think. He just said, ‘Honey, she just wanted to be chauffeured home in a red Jaguar.’

“She literally just walked over to the car and jumped into the backseat,’’ Baldwin said. “I had no idea if she would bite us or not. My rescue dog, a 13-year-old chocolate Labrador named Brogan, just died. I had never done anything to pay back for the 11 years I enjoyed having him.’’

“She let us pet her at the vet,’’ Baldwin said. “Charlotte told us that she would hide when people came to their house. She had a whole makeover. Charlotte told us she was not the same dog that she had lost. She learned a lot about people during her ordeal.’’

Rose adopted Cherokee when she was 14 weeks old.  She had either been dumped as a puppy or born feral.

Cherokee had gone from 76 pounds before the escape to 51 pounds when found. She’s eaten a lot to increase her weight to 61 pounds now.

“Cherokee was in a state of confusion and shock when we got to the vet,’’ Rose said. “She was very submissive and licking the hands of strangers. I’m just so relieved that it’s over.’’

The search and rescue was a relief for all involved.

“When we met the owner at the vet’s, we were all crying and gave each other hugs,’’ the 23-year-old Edgar said. “I definitely felt like a superhero. This is how a superhero feels. I was determined and in a different state of mind.’’

Rose doesn’t know where to start in thanking the community for participating in the search.

“I have important names that need to be shared, but with the understanding there are dozens more that I don’t have,’’ Rose said. “But each and everyone was instrumental in providing us with sighting information  and giving us hope, and helping provide the end result of Cherokee’s safe return home.’’

She praised Fontenot and his staff for their daily searches. Also, a young teenager named Kate who lives with her family near the vet’s office. She searched daily and set up a feeding station.

“Carol DePaul went to the area Cherokee was lost and searched for her,’’ Rose said. “I had posted on Nextdoor, and Carol immediately started searching. Carol Grissom sighted Cherokee and searched. She contacted Lynn Miraglia, as well. Miraglia made signs, flyers, searched, and spoke to community members. She posted Cherokee on Paw Boost, set up feeding stations, field cameras set up on Facebook messenger and headed the Cherokee team.’’

Janet Brown of Windover Farms set up feeding stations and had someone do a drone search. Michele Straney passed out flyers, Ree Foley searched and spoke to people and Rita Creeger also passed out flyers.

“Many of the above names hit the ground running in a heartbeat to the area Cherokee was most recently sighted,’’ Rose said. “I would receive a call and immediately message the team. One or several of the above names were in the sighting area as quickly as possible, often searching for hours at a time and until dark. These were all complete strangers that were not asked to, nor expected to do what they did, but they did what I could not because of home circumstances.

“At Indian River Colony Club, Julie Roberts in administration, the grounds staff and several residents were so helpful. And, of course, Judy Baldwin, Cliff Conner and Emily for finding her at the end.’’

"We had signs up all over, food out to help lure her out, drones flying over, cameras in the woods to help spot her and many caring people concerned for her well being searching for her," DePaul said. "I will say this, if my dog is ever lost I hope I have the same caring-type people in search for my dog."

As a dog trainer, DePaul volunteered to help Rose in the future.

"I told Charlotte that I would do what I could to help her get Cherokee adjusted back at home."