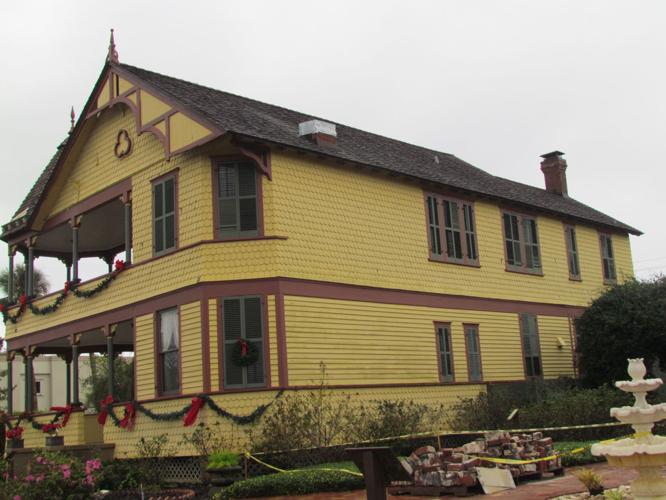 Damage sustained by the Titusville Pritchard House during Hurricane Nicole

included a decorative verge board, which was blown down. Bricks from the 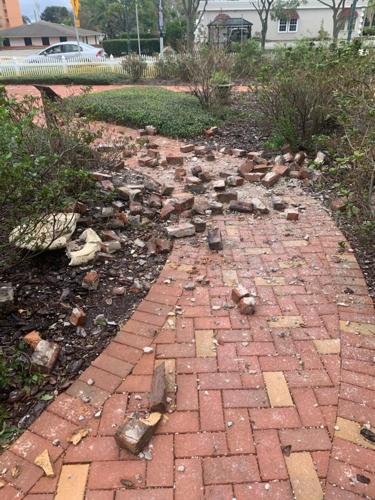 Bricks from the chimney were strewn across the sidewalk following the hurricane.

Damage sustained by the Titusville Pritchard House during Hurricane Nicole

included a decorative verge board, which was blown down. Bricks from the

Bricks from the chimney were strewn across the sidewalk following the hurricane.

Since it was built in 1891, Titusville’s historic Pritchard House has graced the city’s Downtown District.

A venue for many public events, the house was temporarily closed following damage sustained during Hurricane Nicole.

The Pritchard House began as the Pritchard family’s home and now serves as a community museum.

During its 132 years, the house has weathered many storms, including a lightning strike in 2019.

More recently, on Nov. 7, Hurricane Nicole caused damage to the exterior. Half of the front chimney collapsed, leaving bricks scattered on the sidewalk. A front verge board (exterior trim) was also blown off.

The interior sustained no damage, nor did any interior artifacts.

Concern for public safety caused the city of Titusville, which owns the house, to close its doors and cancel all events overseen by the North Brevard Heritage Foundation. These include group and private home tours, talks, presentations and teas.

Tours and teas are hosted by costumed docents. The closure presented a problem because tickets had been sold and reservations made.

“Our Christmas parade porch party was sold out,” said Roz Foster, the President of the North Brevard Heritage Foundation.

But talks with the city and the contractor determined the damage presented no danger to the public and activities could resume. Repairs are underway.

Much is planned for January and February.

On Friday Jan. 20, starting at 11 a.m. the community is invited to an Arbor Day celebration on the grounds.

On Saturday, Feb. 18, starting at 2 p.m., a Best Friend Afternoon Tea and Tour offers the chance to relax in old-fashioned elegance. Reservations are required, as well as a $35 donation.

The Pritchard House is at 424 S. Washington Ave. in Downtown Titusville. For more information, call 321-607-0203 or visit pritchardhouse.com.