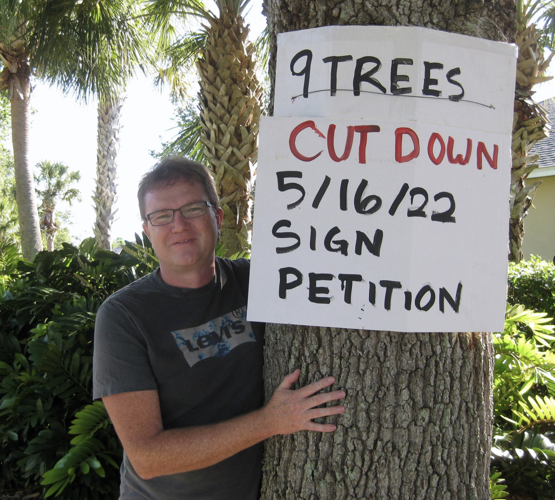 Marek Cyzio, a software engineer/data scientist for Equifax and a Capron Ridge resident since 2006, is spearheading the drive to save the trees. 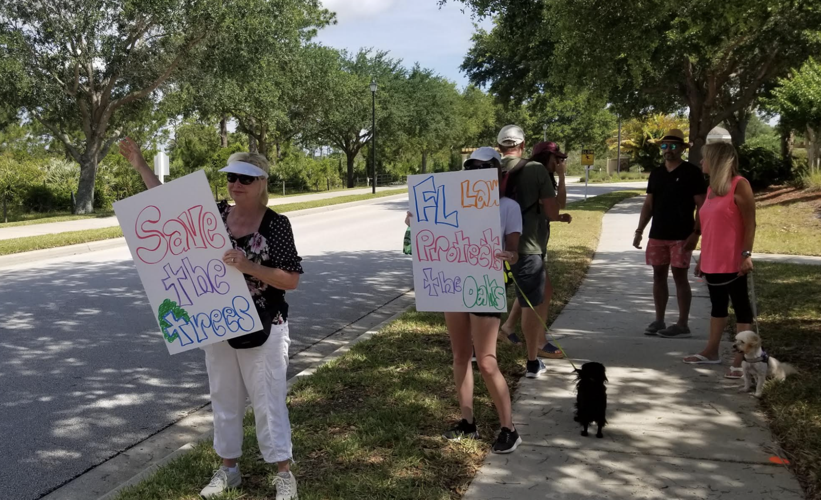 On Saturday, May 14 about 10 Capron Ridge residents waved signs at passing motorists protesting the planned removal of the trees

Brevard County has told the Homeowners Association board that it must obtain a permit before removing nine large Oak trees along the corridor entrance to the Capron Ridge subdivision off Viera Boulevard.

In an email sent Friday, May 13, from Jeffrey Cooke, code enforcement officer with the Brevard County Natural Resources Management Department to the HOA board and its president, that an ”open case investigation” of the HOA is underway for removing two trees — one in front of the community center — without a county permit.

“Because we have an open investigation for other tree removal without a permit, I have informed the HOA that any plans to remove other trees, a permit must be obtained,” Cooke explained.

HOA board president Tom Thomas said the board will be applying for a county permit to remove the trees.

“We are discussing with the county and its engineer about applying for the necessary permit,” Thomas said.

More than 120 residents have signed a petition seeking to save the nine Oak trees from being removed. On Saturday, May 14 about 10 Capron Ridge residents waved signs at passing motorists protesting the planned removal of the trees.

“The actions of this very small minority can have a very negative view of the neighborhood,” Thomas said. “People are trying to sell their homes or those people wanting to move in. We can’t have this negative publicity.”

Cooke said the county can’t stop the HOA from removing the trees but if the board does so without a permit, the HOA could be found in violation and face penalties. The board would then have 30 days to comply.

“The only way you can remove a tree without a permit is if there is an imminent health threat to residents,” Cooke explained. “Sidewalks are not deemed a health risk.”

Cooke also explained that even though the nine Oak trees are on commercial property, a permit still is required.

“There is a misconception from the public that any tree removal, whether it is on vacant land or not, that you don’t need a permit. You need a permit to remove any tree,” he said.

When asked why the HOA board didn’t receive a permit to remove the tree near the clubhouse if there was no “imminent health risk” to residents, Thomas said the tree caused about $5,000 damage to the clubhouse roof and wanted to repair it immediately.

Marek Cyzio, a software engineer/data scientist for Equifax and a Capron Ridge resident since 2007, is spearheading the drive to save the trees.

“These trees are what makes Capron Ridge so special,” he said. “It’s a beautiful alley of trees. It’s got that New Orleans, plantation-style look to it.”

In a May 12 email to Capron Ridge residents, the Homeowners Association board said the decision to remove the trees was a safety issue.

“As part of the safety and security initiatives for our neighborhood, we have identified serious issues that affect the safety of our residents. In addition to already removing 10 dead trees in common areas which presented a safety risk, we also found that many developer-planted trees along Tralee Bay Drive were raising the sidewalks beyond the safety standard. Basically, the sidewalks are unsafe and cause a significant risk for severe injuries and legal exposure, which has already affected other surrounding neighborhoods,” the email read.

“For months, the board has debated this issue — moving sidewalks, cutting out the roots only, pouring thin sidewalks and many other options. The suggestions of foam, shaving the underside of the cement, and rubber sidewalks, which we received this week were novel approaches, but are not feasible options. This was an open process that was documented and thoroughly researched with landscapers, an arborist, cement contractors, tree contractors, legal counsel, and our HOA management company. They all agreed unanimously and urgently with our recommendation,” the email continued.

“The threat of a lawsuit is very real, and very high, and could easily bankrupt our community, causing very large assessments to our residents for the settlements.  This very scenario has already occurred in surrounding neighborhoods on Viera Boulevard. The approach of removing the trees and relaying the sidewalk is what 99 percent of the neighborhoods in our area have used,” the email said.

“So, to protect the safety of our residents, and after a unanimous board vote at the April 20 board meeting … the board recommendation is to continue to move forward. We will be removing only specific trees that have raised sidewalks, creating this safety and legal issue. It is not all of the trees, and there will be a review of the landscape requirements after the project is finished. Like all projects, it will take time to implement, and remediate the area.”

A voice message and repeated calls to the HOA were not returned.

According to another email from the HOA, the work will begin with the removal of sidewalk sections, followed by the removal of the nine trees along Tralee Bay Avenue, and then grinding down the roots. The week of May 23rd the new sidewalks will be poured. In total, we can expect there to be about two weeks where the sidewalks are off limits along Tralee Bay Avenue, from Tipperary to Viera Boulevard. The inbound side from Viera Boulevard has only one tree being removed.

“Please understand that this work is necessary for the safety of our residents, and we did not make this decision lightly. It pains us to have to remove so many beautiful trees that were so poorly located too close to the sidewalks by the developer.  Once the trees have been removed and the sidewalks are safe for your use, we will revisit updating the landscaping as needed,” the email concluded.

Cyzio, who is also president of the Sawgrass Executive Condominium Association in Cape Canaveral, said his association has been struggling with the same issue recently.

“Our insurance threatened us to cancel if we don’t fix the sidewalk that was damaged by tree roots. I am talking to a company that uses foam to raise concrete slabs — instead of trying to lower/replace/grind sidewalk pieces that were raised by tree roots,” he said. “We are going to raise the slabs that were not moved. Based on quotes I got it seems to be cheaper, especially if you include the cost of cutting trees down. Another option is to move the sidewalk away from the trees. There is always an option. We should look for alternatives instead of defacing our community.”

Jose Candelario, a former HOA board member and a two-year Capron Ridge resident, said he quit the board because the HOA refused to look at other alternatives to save the trees.

“Nowhere is there discussion in the HOA board minutes about ways to save the trees,” he said.

However, Thomas said the HOA board did look into alternatives to cutting down the trees and found none of them cost effective and were “incredibly expensive.”

Cyzio said two other issues the HOA board failed to consider was that no permit was issued by Brevard County to remove the trees and that the area surrounding the trees is home to numerous scrub jays, an endangered species in the county.

“Lots of people come here to take pictures of the scrub jays,” Cyzio said. “The trees and the surrounding area have a significant effect on the scrub jay population.”